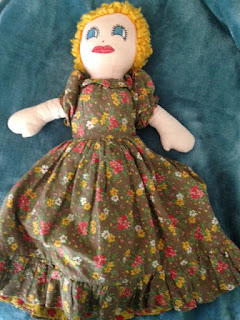 At an estate sale last weekend, I found this little treasure. I love dolls, and handmade dolls are even more special in my eyes than "store bought"! This little vintage gal could easily be older than I am and was very well made. The thing that is special about her is that she has two personalities. 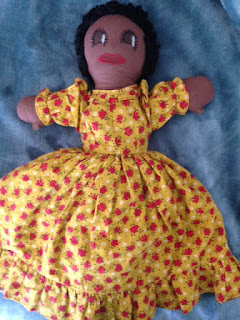 She is a type of "dolly conjoined twin" called a "topsy-turvy doll". 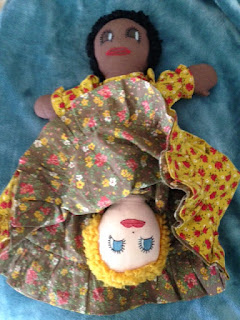 Here you can see that if you flip her over you will find her other half.
There are a couple of theories about how these interesting dolls originated. It is known that they were first seen before the mid 1800's. These were the days of slavery, when white plantation babies were cared for by black slave women.
One theory is that these dolls allowed little slave girls to practice caring for babies of different races, just like their mamas did.
Another theory is that little black slave girls were not allowed to have a white baby doll and this toy allowed them to flip their baby over to the "legal" side when being watched.
(There are probably more theories out there, but these are the two that are hotly debated.)
I would love to know who first came up with this idea. Wasn't she clever!!! Perhaps she just wanted her daughter to have a fun and interesting toy!
There have been many variations of this concept over the years. When I was little, there was a popular Little Red Riding Hood with Grandma at the other end. If you flipped Grandma's bonnet over, the wolf's face was behind it.
Another idea was the sleeping baby on one end and the awake baby on the other.
A quick Google search will yield many variations.
In the meantime, I will enjoy owning this piece of Americana. I'll think of the busy fingers sewing away for someone they loved dearly. I am inspired to make my own version now.
Watch for it! I've already started!