The History of the Button

For some reason, I'm fascinated with buttons! I've even put them on quilts. I love the shapes, colors, sizes.....the sound of them in a glass jar, the stories they've been around for...you name it. I have a jar of buttons that I bought at a garage sale once. It had many old buttons in it. Then I inherited my grandmother's and great grandmother's button jar. I love those buttons! My great grandmother was married in 1906, so there could be some really old buttons in there!
Many were clipped off of shirts and dresses during the Depression to be used again and again. You didn't waste anything! Some of them still have a small part of the original shirt or coat or dress still attached!

Buttons have not been around forever. The earliest buttons that were used on clothing were from the Indus Islands about 3000 years ago. They were made of seashells and had holes so that they could be sewn to clothing. They were used more for ornamentation than anything else. It was not until the 13th century that some brilliant German came up with the use of buttons as a means of fastening a garment closed! (Before that, you were either sewn into your clothes or tied in!)
Buttons became like jewelry. Artists created buttons that were beautiful, one of kind pieces. The wealthy showed off by using many buttons on their clothing. There were even royal decrees limiting the type of buttons you wore to those suited to your social class!
By the 17th and 18th centuries, buttons were being produced in many different materials and shapes. Beautiful buttons were produced in France and Germany, but England soon became a front runner in the production of buttons. Buttons could depict hunting scenes, portraits, family crests, or anything else that an artist might paint, carve, mold, or embroider on a button.
As the American revolution neared, the colonists showed their American patriotism by buying only American made buttons instead of the British buttons they were accustomed to. Buttons were crafted from wood, pewter, brass, and  papier mache. Paul Revere made buttons in silver. Phineas Pratt, a well known maker of piano keys, made buttons in ivory.
In the mid 1800's, button production was in its "Golden Age". Mass production meant that it was possible to produce buttons in quantities never seen before. Not long after this, the sewing machine became a common tool of many homemakers who needed buttons for the garments they produced at home. The button was now readily affordable, but the artistry was disappearing.
From 1860 to 1900, the Charm String became popular among young girls. They started by stringing a large button on a string. This was the "touch button". After this they added buttons from friends and relatives. The goal was to string 1000 buttons on their string. When the 1000th button went on, their true love was to soon come and "sweep them off their feet". (Of course, in some circles, it became a popularity game and it was said that if the 1000th button went on, the girl would be a spinster.) So much for superstition!
Buttons have stuck around despite the invention of zippers and hook and loop tape! (I'm glad we don't have to button our shoes anymore, but that's a different story.)
I think you'll always see a jar of buttons in my sewing room! 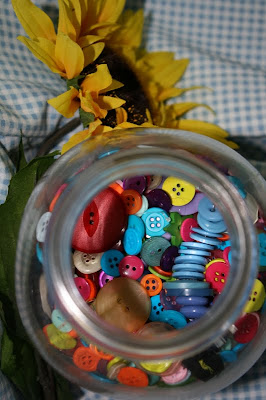 Yesterday, Annie of Ruby Slipperz had a great post about buttons that you can read   here  . I had this post written already. Take a look at her buttons and read what she has to say about those she has inherited, too. Buttons often have warm memories attached to them! You might take another look at what you have in your button jar!

Don't forget about the giveaway! You have until July 6 at midnight, CST.  To enter, go to this page

Lunch Bag or Purse Tutorial and a Giveaway! 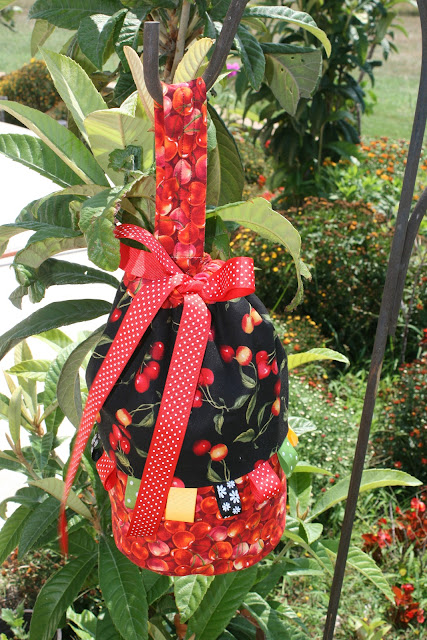 I was looking through a sewing book from the 1940's that had a description of what they called a "Miser's Bag". It was basically a bag formed by a tube with a circular bottom and a drawstring at the top. I thought it would make a great lunch bag, so I used the basic idea and added my own touches to give it a little more appeal!


To start with, you need a few things:

Fabric - (fat quarters will work) Although I have specified the the fabrics I used, use any fabric you want! I have shown other examples at the end of this post. You will need:


Because you took the time to visit me today, I'm having a little giveaway. All you have to do is leave me a comment for a chance to win. For a second chance, let me know you are a follower (either a new one or an existing one-  Please do this in a separate comment.) That's all you have to do.  Contest will close Wednesday, July 6, at midnight (CST). What do you have a chance to win? How about 2 patterns of your choice (to be shipped) from B.Bumble & Co.  (this includes new patterns on the What's New page) plus my new little bee pin cushion kit. See it here .
Have fun! Thank you for visiting today!!!

What do you stuff a pin cushion with? Many of you use fiberfill. It is available, cheap, easy to use. BUT, the down side is that it is so lightweight, your pin cushion can be sent flying through the air with just a flick of the wrist! It does absolutely nothing for your pins and needles either! It is really difficult to stuff the cushion firmly enough with fiberfill to easily hold the pins and needles.

I've been working on a new pattern. It is a  little bee pin cushion and will come as a kit. You will have the materials to make 2 pin cushions. Two little gift cards with a cute little verse will be included. While working on the design, I started thinking about stuffing. I was using cotton, which is okay, but still not perfect.
So I went on a search. What are other people using as filling for pin cushions? Here is what I found, in no particular order:
There are a few ideas that come to mind from historical accounts of mattress stuffing such as horsehair, feathers, straw, dandelion fluff and even Spanish moss!
I picked up a little pillow for a couple of dollars that is filled with little styrofoam pellets. I think that would work if stuffed tightly (although it wouldn't give the weight I would like.)
Notice that I am not endorsing any of these ideas. Some might work beautifully and some might make a mess! Some might need to be placed in an inner "bag" to keep dust from seeping out.
Are there any other ideas out there? What do you use?

Grandson's Room and a New Pet 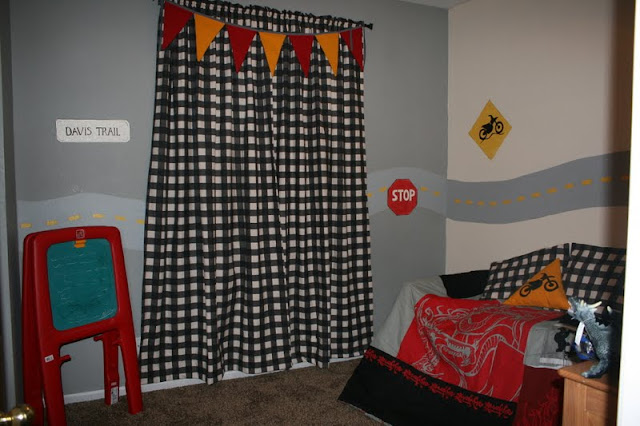 Tah-Dah! Of course, you have to use your imagination a little. His "big boy" bed is not here yet, so we just built up his youth bed with a suitcase and tried to give the effect of a bigger bed. There are things I would change - I would make the road signs bigger, for instance, but I leave in the morning so I need to just call it finished. My grandson loved it and that is what counts.
I've been sitting here listening to what sounds like far away barking. Then it dawned on me - I'm hearing my grandson's new pets! Fire bellied frogs. He named this one Harry. (I couldn't quite get him in focus because I was shooting through glass, but I think you can see his beautiful coloring. His stomach is bright red-orange!) I can see a quilt design here. Hmmmm............ 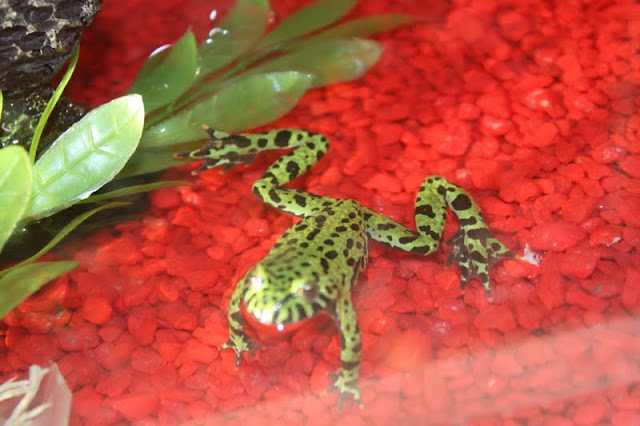 A Bedspread out of a Drop Cloth (Because I Promised) 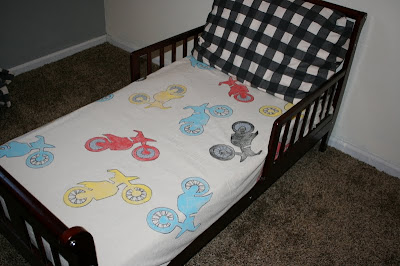 I promised to tell you how to make a bedspread out of a canvas painter's drop cloth ($8.99 at Lowe's). 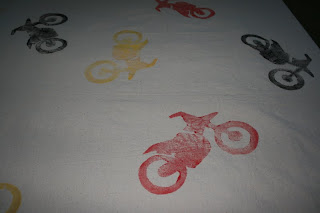 Just to show you what I am dealing with in trying to get this room completed before I leave Thursday morning, I turned around just now to see this tugging at my sleeve! Good thing I had my camera handy! 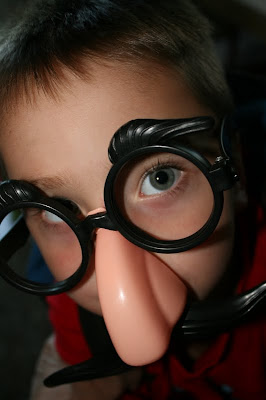 While fighting off villains, I've decided that instead of a bedspread I am going to use the cloth as a special tablecloth or picnic cloth. The  colors did not come out as bright as I needed them to be. I like the idea though. I think I can tweak it and make something really nice. Maybe some Celtic knots in black? Some Primitive Embroidery? (It does have the feel of linen when washed!) I think I'll come up with a different use and show you later.

Quilts From My Past 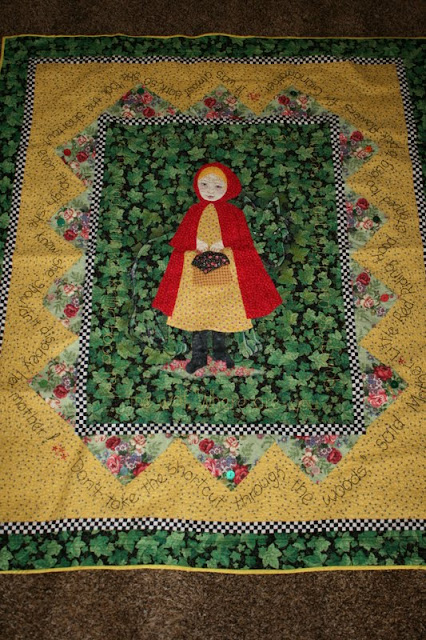 Since I'm in California for another week, I thought I would photograph some of the quilts we are pulling out of packing boxes here at my son's house.
Little Red Riding Hood - Made for my granddaughter in 2006. I made this while with my husband on a 2 month long stay in Golden, Colorado. We were in a hotel room and I had a little sewing machine to use. The story is embroidered around the perimeter of the quilt in the center panel and the yellow border. If you enlarge the picture you may be able to see the wolf hiding behind her. (Hint: it's head is on right between her head and the basket and it's rear is on her left.) It is very subtle (on purpose). The large "prairie points" can be unbuttoned as a game. Behind each is something she might have seen in the forest. Where is the wolf? 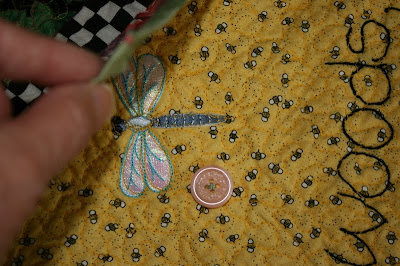 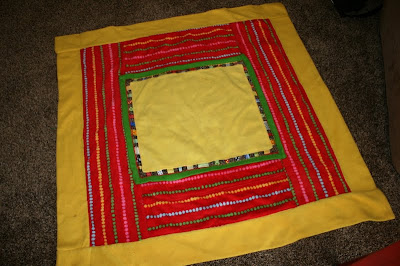 Stay tuned and I'll show you how I'm making a bedspread out of a canvas drop cloth! (unless my idea totally fails!)
See you later!

Email ThisBlogThis!Share to TwitterShare to FacebookShare to Pinterest
Labels: my quilts

Painting a Mural with My Granddaughter


Another day of tropical island decorating. We unpacked all the moving boxes in the bedroom and got started finishing the mural. My granddaughter said, "You should add a hula dancer, Nana!" I said, "Okay. Draw one off as big as a piece of paper and we will put it up." She ran off to draw her girl. She called out at one point from the other room, "Nana, I have to start over. My girl is so skinny she can only have one coconut!" (She is 8. She was not trying to be funny.) I immediately sent a text to my sister to tell her of the cute remark. You can't have a one coconut hula dancer, now, can you?