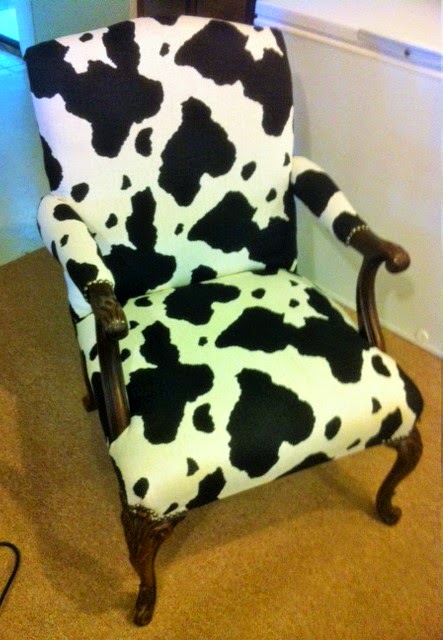 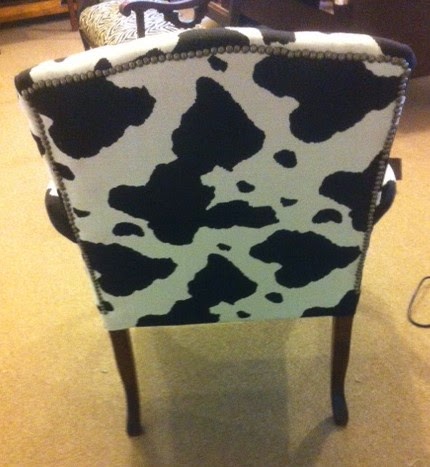 Ta-da! It's finished. Okay, so it's not perfect! (I did go in and straighten some of those crooked nail heads, but failed to get a picture of it.)
It is sitting in the workshop here and not in it's setting. BUT, I did it!!! I really did! I upholstered a chair from start to finish! My sons have teased me about it being "cow" fabric, but it is supposed to be PINTO PONY!!! I didn't want cow!

As an update from last week, I added padding to the back of the chair and covered the top part of the ottoman with the dacron.


I upholstered the back and added nailheads to the arms and all other areas where it originally had them. (I found out afterwards that I could have bought nail head strips that make this job much easier. They are strips of nail heads with every few inches a real nail to tack in. The rest just sit on top. It would have made the difficult job of getting them straight easier.) I plan on revealing the entire chair and ottoman (I have a surprise in relation to those two) in September when I show you some of the things I've accomplished this summer. (The "See You in September Hop! Coming sooner than you think!)
I'm having a little bit of an issue this morning trying to post. I was startled when something grabbed my hand while I moved the mouse around! I should have known that cats are famous for hunting mice! 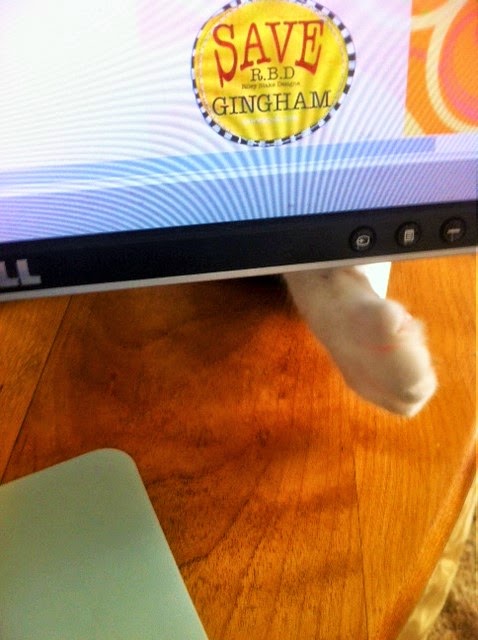 Although things are moving along in the hill country, we are in a holding pattern yet again waiting for things to happen. We spent two extra days there getting things ready for progress this week, but so far nobody has shown up to do their part. The dry wall guy had been there preparing the walls for texturing, but no patching had been done. I know it will all come together eventually!

I snapped a photo of this spider web on the grounds of the hill country property. There has been a drought there, but "stars" of limestone were trapped in the web from a light drizzle. They were sparkling and shining in the sunlight. When I stopped to take a picture, I was reminded of the little spider that sits and waits for something to get trapped in his web. Waiting is just part of living - even for God's tiniest creatures. Plus, I'm not having to wait for my sustenance. No, I'm well fed! 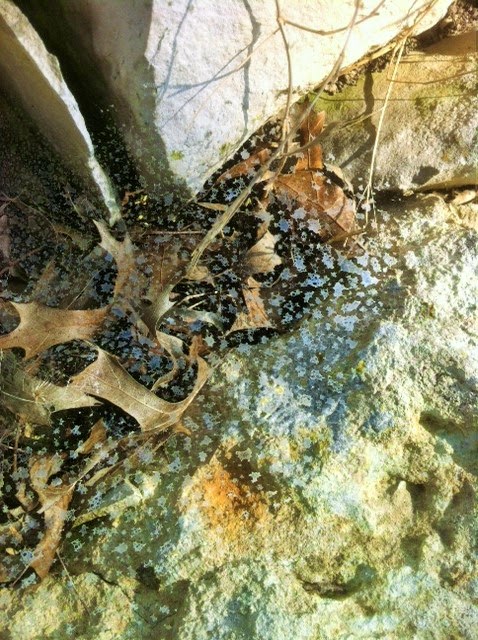 I was reminded of Psalm  145:15 - 16
"The eyes of all look to you in hope; you give them their food as they need it.
When you open your hand, you satisfy the hunger and thirst of every living thing."