The Right Needle for the Job

Choosing the best needle for the work you're doing is not as easy as just finding a needle among the pins in a pin cushion. Any needle may take the thread through the fabric, but the right needle will make this job much easier. 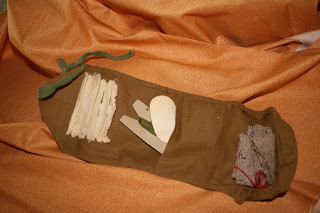 Needles have been around for almost as long as people have worn some type of clothing or sewn a shelter from animal hides. Early needles were made from bone, or in the case of Native Americans in the southwest, made from the spines of the Agave plant. It amazes me just how ingenious people can be! Needles have been an important staple for a long time. I have an old sewing kit that I found in a box of sewing supplies bought with a treadle machine at an auction. I think it was given out as part of Army gear during one of the wars. There is actually a square cut out of the army drab fabric pocket at the bottom of the case. I would love to know why. Did the soldier have to patch his uniform? In this same box, I found an old needle case advertising snuff. 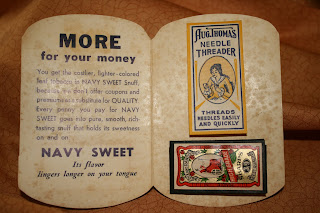 Modern needles are made from steel or stainless steel and go through a meticulous process of cutting, grinding, stamping, punching, heating, cooling, plating, and polishing. The more tapered and polished a needle is, the better quality it will be.( English and European needles tend to be higher quality than those made in China. Japanese needles can also be higher quality.) Cheaper needles tend to have burrs that will break threads and make the entire process of sewing more difficult. If your fingers are getting tired while doing hand sewing, change to a higher quality needle and see if you can tell a difference. By the way, needles will get dull after much use, so they do not last forever! Because early needles, even those used by your great grandmothers and sometimes your grandmothers, were very expensive and rusted easily, they were run through emery (aluminum oxide) after use and kept in wool. I remember the little "strawberry" at the top of my mother's old pin cushion had a gray powder in it. I'm assuming this was the emery. Modern needles are plated and make this unnecessary. 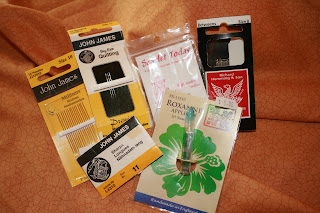 When trying to buy needles you might be overwhelmed with the different types and sizes. First of all, the size matters to the use. In needles, the larger the size number the smaller and shorter the needle. I can't remember the exact method of sizing, but a simplified way to remember this is to determine how many wires will fit inside a certain diameter ring. (Similar to measuring spaghetti in one of those rings designed for that purpose.) Of course, the thinner the wire, the more wires it will take to fill the ring. If it takes 10 wires to fill the ring, the wire is a #10. If the wire is thicker, it might only take 6 wires, so those thicker wires would be a #6. Of course, I'm sure people who KNOW what I'm talking about are rolling their eyes at my oversimplification, but it works for me. The exception to this rule is the sewing machine needle. They are sized in reverse of this. The bigger the number, the bigger the needle. I don't know why!

In addition to different sizes, there are different types of needles. Here is a simple chart that might help you decide which you need: 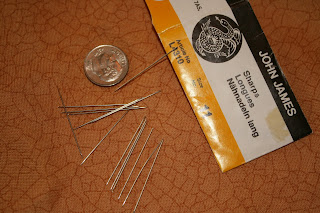 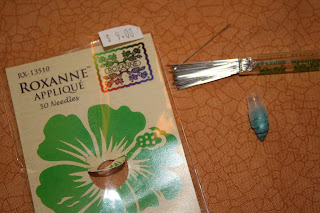 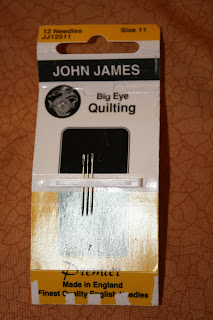 Quilting(Betweens) - very short length for hand quilting. The shorter the needle, the smaller the stitches you can get. 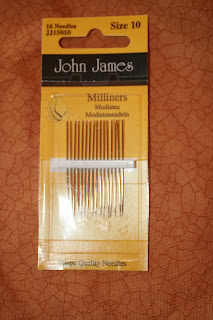 Milliners - designed for hat making, but because of its longer length and thinner shaft, it is sometimes used in needle turned applique or for basting.

There are other types of needles out there that are not used as often in quilting such as ball point needles used for sewing knits, tapestry needles for crewel embroidery, and darners used for basting and darning ( I'm not sure how many people actually darn anymore!) 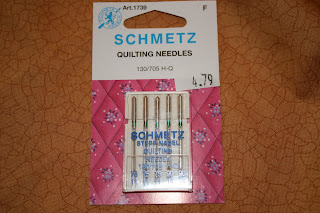 If you are having a hard time deciding which type of needle to use, ask around in your local quilt shop. They generally carry good quality needles and may have some good advice for you.
Posted by Linda at 10:24 AM