A Treasure Hunt in a Tomato?

Update about Flooding: I have had many inquiries about my safety. Yes, we are in the middle of all this flooding, both in Pleasanton and in the Hill Country house. We are fine and have had no problems. More rain is expected, so your prayers are appreciated for those who have or who may lose homes and crops. Our hearts go out to those who have lost family members! Thank you for your concern! 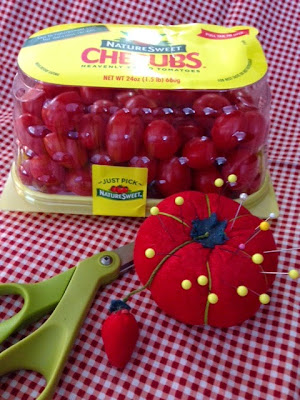 Have you ever wondered why most of us have a tomato shaped pin cushion? Why a tomato? I wanted to know the answer! Here is what I found on Wikipedia:

"One popular design—a tomato with a strawberry attached—was most likely introduced during the Victorian Era. According to folklore, placing a tomato on the mantel of a new house guaranteed prosperity and repelled evil spirits. If tomatoes were out of season, families improvised by using a round ball of red fabric filled with sand or sawdust. The good-luck symbol also served a practical purpose—a place to store pins. Typically, the tomato is filled with wool roving to prevent rust, and the strawberry is filled with an abrasive to clean and sharpen the pins."

Did you know that those old tomatoes can have years of buried treasure inside? No, I'm not referring to that old, dusty filling. I'm referring to those needles that work their way down into the filling because they're not PINS! They don't have a head to keep them above ground! If you've ever dropped one and stepped on it, you will have a painful awareness of this fact!
I have a very old pin cushion that had belonged to my grandmother. Over the last few days, I have been picking needles out of it because they had worked their way down into the stuffing as they tend to do. 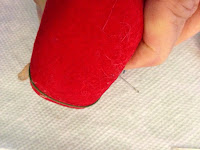 You may have done this. You squeeze and manipulate the body of the pin cushion, working the needles that are trapped inside, until the points stick out enough that you can grab them and pull them out. 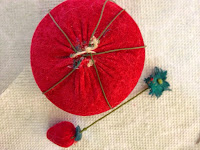 After removing about 12 needles, I decided that there were others in there that I just couldn't get to! The little emory strawberry was coming off and I could see that there is nothing very complicated about the construction of this pincushion. 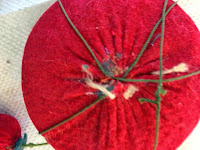 I clipped the white string that was gathering the top and slipped the green string off. 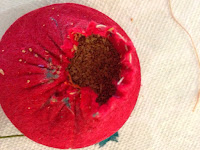 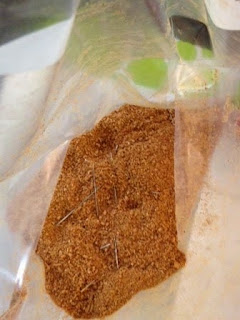 After dumping the filling into a plastic bag, I could see the treasures just waiting to be found! 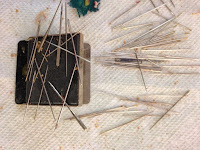 I used a magnet to comb through the filling and removed over 70 more needles! Yes, SEVENTY! All but about three were in great condition!
Because this had been my grandmother's pin cushion and I was sentimental about it,  I put it back together. 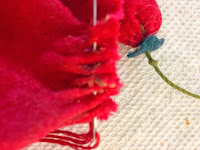 I used six strands of embroidery floss to gather the top again. I refilled it with the original filling and tied off the floss. 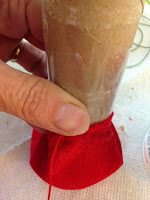 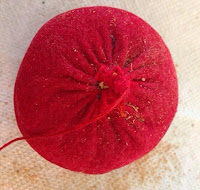 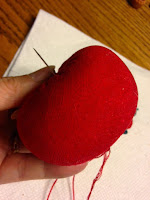 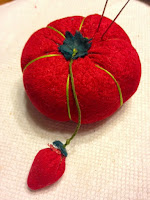 I used about 24" of green embroidery floss and a long needle to make the sections of the tomato. I used my fingernail to gently make the sections.  I made each indention before pulling the thread from the top, around the side, and through the bottom.  I pulled it snug and then came back up to the top to start the next section. I replaced the top after securing the green floss. 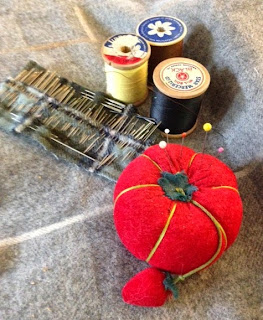 Here is my old pincushion emptied of it's treasures, but put back together. There is an added benefit to redoing it. It is now firm and works a lot better!  As you can see, I put all those needles in a piece of wool and will sort them out by size later. All of the needles you see here came out of the inside of that pincushion! That's a LOT of needles and they represent a LOT of years of sewing! (My grandmother died this year at age 106!)
I wonder if some of these were used to make some of the little dresses my Grandmother made for me?
Does your pin cushion hold any treasure?
I made a little "needle book" to hold my needles. It's nothing special, but it does the job! 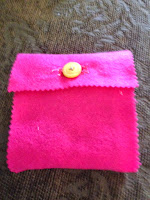 There are 8 pages made of wool so I can catagorize my needles.


I have posted several "pincushion" posts in the past that you may want to check out:

Stuffing a Pincushion (suggestions for fillings)

My Day at the Spa (art pin cushions, no tutorial)

I also have several patterns for pincushions on Craftsy! Check them out by scrolling through the patterns at the top right of this page!